Between the stories, Amouage Interlude Man

I thought I would never live to see a new fragrance release appearing so fast in my country. We usually had bigger or smaller delays and some fragrances never reach the market here, but there it is! Thanks to people from my favourite niche perfume boutique, Quality Missala, who did an amazing job here, I can enjoy the newest duet from the niche perfume house, Amouage – named Interlude. The main concept behind these two perfume is to evoke an air of disorder while maintaining a sense of balance and tranquility through the inventive use of incense and myrrh. [1] 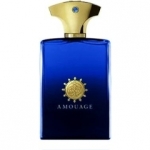 Amouage Interlude Man begins with a prominent bergamot note, spiced with a small but noticeable dose of basil, pimento berries and also a generous amount of pepper. Spices cause the bergamot to lose it’s fresh, lively aroma while at the same time they make it heavier and drier. Few minutes later Interlude Men develops into something darker and dense, that’s because of ambery notes which work together with leather accord. This addition of leather, as well as frankincense make the whole perfume to smell quite smoky but not in the way you can experience incense in other Amouage perfume. Interlude is mild on the incense and heavier on the spicy-woody aspect.

After some greater amount of time Interlude takes another turn and becomes warmer. In this particular stage you can smell myrrh, labdanum, some patchouli and opoponax which makes the fragrance sweeter than it was at the beginning. Woods like sandalwood and agarwood are definitely here providing the warm-dry sensation, they’re hard to pick up though in the mixture of spices. Thinking more about Amouage Interlude Man leads me to a conclusion that this fragrance really has something chaotic in it. The combination of notes and the way they turn from one to another has something unexpected and not obvious.

Amouage Interlude Man is classified as spicy – woody fragrance and it was developed by Pierre Negrin. The precious juice is sealed in square bottle which is singature to the Amouage perfume line for man. This time the glass has a deep, midnight blue colour and it has a golden-coloured cap with a blue Swarovsky crystal. Outer packaging itself is covered in colorful spots that lack regularity. These spots are meant to indicate the conceptual disorder. In this fragrance Amouage has established an enviable reputation for re-inventing accustomed scents. Frankincense and Myrrh traditionally smell spiritual and religious but in Interlude, they have been reconstructed to feel contemporary yet sophisticated. [2]

Interlude Man has an outstanding sillage in the initial few hours. I sprayed it in the morning and when my Mum came back home she said she could smell it in every room. Many hours later it’s still perfectly noticeable but it tends to stay closer to the skin, so longevity is not a troubling issue. Interlude Man by Amouage is a creation of 2012 and is available in 50 ml and 100 ml bottles and it’s Eau de Parfum concentrated. Along with Interlude Man the female interpretation, Interlude Woman, was also introduced. Stay tuned as it will be reviewed in a couple of days.

note: [1] & [2] via fragrantica.net, sample is a courtesy of Quality Missala niche perfume boutique.

12 thoughts on “Between the stories, Amouage Interlude Man”