Acqua di Latte is a second candle (after Via della Basilica) from the recently created brand Rive Sud Interior owned by Christine Bodino. Its smell is very different comparing to the churchy and ascetic smell of Via della Basilica. It fits the wintery atmosphere so I decided to write about it.

The composition of Acqua di Latte (Water of Milk, Water with Milk) candle includes accords of star anise, angelica and white musks. When the candlewick is unlit the candle is almost scentless but as soon as you give it a little bit of fire and the wax begins to melt it releases its aroma. It’s not as intensive and not as obvious as in case of Via della Basilica.

The aroma it gives is very light and subtle. At first you can notice star anise combined with angelica. They both give a pleasant and inoffensive spicy feeling, quite blurred like it was coming to you from a distant place. At some point of each burning white musk dominates over the other two notes, giving that embracing and enveloping, creamy and milky feeling. There’s this gentle warmth about this candle that makes me feel of a cashmere sweater in a color of beige. 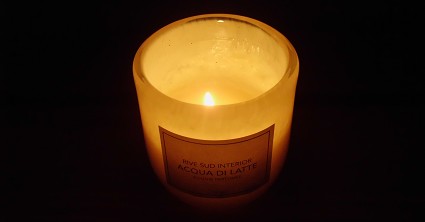 Rive Sud Interior Acqua di Latte candle doesn’t have a big throw. It won’t scent the entire room (unless it’s a really small and cozy one) but it will certainly smell the air around the place it’s standing and burning. Its perfume qualities make me think of a street cafe placed by the quite and narrow street far away from the centre. Interesting think is that when it burns you can notice two phases – a completely molten wax and a thinker white paste.

I was curious and had to see what it was. It was waxy but it wasn’t hot at all and it smelled of the candle perfume composition. I rubbed it against my wrist – it left a shiny oily texture but it actually allowed me to wear Acqua di Latte blend on my skin. Interesting, isn’t it. And I love the jar of this candle. Rounded, with a simple label. The glass is milky white from the inside so when the burning wick drops down after a couple of uses the entire jar glows like a lantern.

[note] pictures for the post were taken by me. All rights reserved.