Last week I received a surprise package that I would never think of. Such surprises are a real fun because you never know what to expect. After opening the safety bag it turned out, to my amazement that it was a small box with an Amouage logo and inside of it was a preview mini bottle of the eighth tome in the famous Library Collection – Opus VIII in a burgundy pouch. It was a real thrill to spray it on my skin for the first time. I feel honored that the brand owners along with creative director Christopher Chong wanted me to have this scent for an early preview.

The opening of Amouage Opus VIII initially gave me an impression like I was smelling some lilies. It took me more than 10 minutes to actually realize that what I smelled was jasmine, not lily. 20 minutes into fragrance development the jasmine accord becomes more obvious. It’s slightly heady, a little bit dirty and there’s a minimal dose of indol there. Next comes the ylang-yland chord which makes the new Library Collection fragrance really creamy, velvety and sensual with some hidden sex appeal to it. The feeling that I get is quite custardy, a tad sweet and milky. Maybe it was ylang-ylang that tricked me with the lily mimicking at first…

Until the 45th minute jasmine and ylang-ylang are two main actors of Opus VIII. When the clock ticks away the end of minute 44 this perfume gains a new face, much more pale, ethereal and sheer. Orange blossom note gives its specific freshness to the scent but in this composition it also has a honeyed finish in my opinion. There’s also something slightly animalic to that honey note. I think it’s either honey (which is not in the official notes) or ylang that warmed up the aroma of orange blossoms. Otherwise the fragrance could become too cold and in the form that it was blended it would be an overuse. Sheer describes this part of the top of this scent better. And cuddly too! 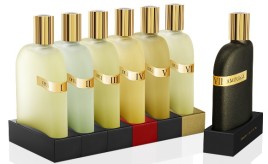 After almost two hours of having the perfume on my skin Library Collection Opus VIII the top notes slowly begin to weaken and dissipate, preparing the stage for the upcoming heart notes of this composition. In this stage of development I smell ginger as the earliest odour. It’s fizzy and sparkling like bubbles in a lemonade. Almost literally because the note has a citric, lemony finish with a hint of spiciness that I really liked.

Things got even more spicy after 30 minutes when saffron joined the composition. It isn’t as bright and delicious as in Safran Troublant or Safran Nobile but it certainly amplifies the spicy tones of Opus VIII making the composition more lively, more vivid. The initial delicacy of the composition was misleading, because now the Amouage develops much more density. The substance is created with a use of vetiver, woody and kind of dry, combined with gaiac wood. No worries folks, it doesn’t smell like oud, it doesn’t even remind the faintest shadow of that accord. Gaiac just smells woody, maybe a little bit oily and kind of moist, like some sappy juices were flowing from its core.

At 3 hours mark a pale smokiness appears from the deeper parts of Amouage Opus VIII blend. It was introduced to the composition with a gentle hand as this note never gets too heavy. It’s airy and fleeting like the silver smoke of incense floating above the shrine in a temple. Frankincense brings a comfortable contemplation to the scent which lasts for around 1 hour. After an hour you might start to notice that spicy, woody and incensy notes become more lightweight and interact with each other so much that at some point they’re all so twisted it’s hard to extinguish one accord from the other.

The calm down phase of the heart notes lasts almost for one additional hour so that the base notes start to appear when Opus VIII is with you for 5 hours already. I would describe it as mild and sophisticated. There are some balms as well as the benzoin molecules that make it balsamic, more substantial and slightly creamy. I think there was also a little bit of vanilla there. Everything is finished with bay from Jamaica. It adds a final touch to the composition.

As you can tell after reading my impressions of the new fragrance, Amouage Opus VIII is a complete opposite of Opus VII from 2013. The latter was really dark, dense, quite hard to understand and enjoy while this year edition is light, airy, pretty and admirably good. It’s like these two fragrances are a contradiction of one another. On the other hand Opus VIII isn’t light and delicate all the way. There are like two parallel universes in this perfume.

When I asked Christopher Chong on Facebook if he could tell in just one sentence what was his inspiration, what guided him to create Amouage Opus VIII that way, he said:

Opus VIII is a woody and floral fragrance inspired by the trompe l’oeil effect of creating a dialogue between reality and illusion.

And a sentence of explanation here. Trompe l’oeil is an art technique using a realistic imagery to create optical illusions, giving you the impression of seeing objects in three dimensions. That pretty sums up the thing. Just like in this technique our eyes can deceive us, in case of Opus VIII by Amouage our noses can fool us, the perfume has its own transitions.

To me this new tome in the library of Amouage is like a fresh breath of spring, like a new life given to someone who thought they didn’t deserve it. It’s inspiring, tranquil and it lifts the mood. It kind of makes me think of snowdrops that mark the first appearance of the new cycle of the seasons. And I absolutely appreciate the fact that it’s so, so different comparing to the earlier seven Opus scents.

Amouage Library Collection Opus VIII was composed by perfumers: Pierre Negrin and Richard Herpin under a creative guidance of Christopher Chong. The fragrance is probably an eau de parfum just like other tomes in this line and a flacons are 50 ml (other Opus scents also available in new size) and 100 ml. The fragrance is characterized by a nice, medium level of sillage while longevity is not an issue, the perfume lasts 10-12 hours, gets closer to skin starting at 6 hour.

I would like to pay the Amouage generosity forward by offering a 2 ml decanted sample to one lucky reader. All you need to do is leave a comment telling me what part of Opus VIII appeals to you and if you have a favourite Amouage scent or the one you’d like to try next. It’s a worldwide draw, open until Thursday, March 20th. I’ll announce the winner the next day.

[note] Many thanks to Amouage for providing the scent.