The niche perfume line of Arquiste offers an interesting combination of sensorial pleasures. It sources its inspirations from the history (a pleasure for your mind), from architecture (a pleasure for your eyes) and from different corners of the world. And the latter one offers to your nose a real olfactory experience of a distant place. Founded in 2012 by an architect specializing in Historic Preservation – Carlos Huber, the brand continues to tell the American story of the Europe-derived perfume art, by slowly introducing new compositions to their scented palette.

During the Esxence perfume fair in Milan this March, Carlos presented one more perfume next to the L’Etrog Acqua that I told you about some time ago. This other perfume seems to be especially influenced by Carlos himself. The Architects Club, for that is the name of the fragrance, is different from Arquiste‘s earlier compositions. Not only in a matter of different scent but also in a matter of story that hides behind this perfume. But about that – just a little bit later.

The Architects Club commences with this kind of boozy and alcoholic vibe. When you give it a few minutes to ‘adhere’ to your skin, you will most likely start to notice the dry facet. Couple of minutes more and the gin accord becomes really prominent. It quickly looses its initial booziness but the aroma lingers for a long amount of time. After a while the aroma of bitter orange appears on top on the composition, adding a very nice and a bit juicy flavor to perfectly balance the dryness from the gin. There is also a candied sweetness of the orange rind that I detect. 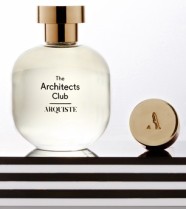 After 20-30 minutes the composition of The Architects Club starts to change. From the refreshing taste of orange-flavored gin the scent goes into an aromatic territory. A whole bunch of juniper berries quickly takes over the entire blend and adds a big  volume to the scent. As we’re dealing with juniper berries now the metallic vibe is what I was expecting. And the perfume delivered.  Shortly after this note emerged from the new Arquiste fragrance this genuinely metallic vibe appeared. It also gave this really cold feeling to it! It’s like someone poured and ice-cold quinine tonic to your glass. This impression is present for around 30 minutes.

When the juniper chill dissipates I begin to notice a little bit of lemon, especially the peel, emanating its wonderful and mouth-watering aroma somewhere distant, in the background. It’s like you could smell it but you couldn’t see it with your eyes. It’s hidden. Now that we’ve had a really cold drink offered to us by The Architects Club, we’re ready to move forward and accept some warmth. That’s right, at the end of 1st hour the perfume transitions from cold to warm. It’s a very enjoyable feeling.

Among the warm notes the first one that I noticed was the guaiac wood (reminding you once again that this is not the same as oud!) It immediately adds a material substance, almost allowing you to touch the scent. What I smell now has much more density than at the beginning and it’s much more sensuous and enveloping. Guaiac wood brings in some sort of warm smokiness which is hard to describe. It smells awesome – that’s what I have to say about it. The addition of angelica introduces the nice element of mild spiciness that is totally under control.

Angelica and guaiac are in perfect harmony with each other. None of them has a dominant role, instead one highlights the best things the other one has to offer and vice versa. The longer I get to smell The Architects Club in this stage the stronger I have a feeling like I could get ‘absorbed’ by this perfume, that I could sink into it and forget about the entire world. As the time flies the perfume gains an additional portion of warmth thanks to the amber accord. It has some density but is generally light and luminous, adding a delicate resinous quality.

Dusk, March, 1930, Mayfair, London
A group of architects gather for cocktails at Mayfair’s smartest Art Deco smoking room. As they settle in the warm interior of dark woods, leather and velvet, London’s bright young things burst in, frosted martinis in hand, surrounded by a cloud of laughter, white smoke and fine vanilla.

The press release vision of The Architects Club ideally reflects the character of this perfume. Old wooden tables, dimmed lights, huge velvet chairs you can drown in. And a drink. Some swirls of smoke lazily drift in the air until they fade away leaving just a bit of smoky smell behind.

Probably the most important role in Arquiste‘s new fragrance is the vanilla accord. It starts light and fluffy but when you give it some time it becomes more dense and dark, dominating the composition of The Architects Club step by step. Combined with the earlier notes it has a resinous edge and to me there is something ethyl maltol styled in this perfume as I smell some caramelized vibe with some smoke coming from this vanilla note. List of the ingredients also mentions pepperwood (whoever knows how that smells…) and oak. Possibly I didn’t smell it as there is a chance it overlapped with guaiac wood.

The Architects Club is a great perfume. Cold and a bit ‘keep away from me’ at the beginning, warm, cozy and enveloping at the later stages. The woody-smoky-vanillic combination suggests to wear it in Autumn in Winter when temperatures are lower. That’s when it should smell especially good. The perfume was created by perfumer Yann Vasnier with assistance of Carlos Huber. This new eau de parfum will come in 100 ml bottles (new size) of the same design as bottles of earlier creations. The scent is now available at Arquiste website, international distribution is scheduled for September.