One of the oldest ingredients used in perfumery is musk. Documents mentioning its value in scent creation date back to 6th century but was known even before those reports, in antique times. The secretion of the perineal glands of musk deer has the power to add warmth, sensuality & complexity to any composition. Many vintage perfume reached a stellar status thanks to musk. Nowadays using natural material is forbidden and despite high number of synthetic musky molecules nothing can compare to a real deal. Perfumers, however, love musk and they keep on trying to blend a perfect musk concoction. Among boring white musks and skanky stuff, Aedes lights the light of hope. 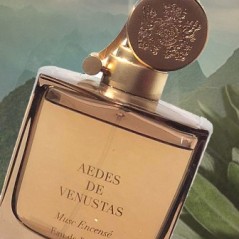 Musc Encense starts rather herbacious, almost like a frozen mint, but it lacks all the freshness it would have if it was mint actually. Just a few minutes later we take a deep dive into an aromatic accord. As the perfume takes us deeper and deeper into it, things are getting more dark, eccentric and even a bit slimy at times. When those few initial minutes pass I get the impression as if I was descending down the stone well covered with clary sage. Its aroma, combining elements of green and fougere is a source of quite clear scent that also bears the feeling of something fresh and moist.

This phase however doesn’t last too long & soon enough clary sage of Musc Encense starts to transform. As a result it becomes more masculine and bulky, it gains some testosterone and seductiveness. Yes, it smells sweaty too but not in a repulsive way. It’s like a muscular torso shining because of droplets of sweat. It’s sexy. Later frankincense joins the composition. Thanks to in Musc Encense feels much warmer than its initial temperature. I find its smokiness really appealing as it smells meditative and spiritual without transporting you inside of a Medieval church.

Despite a usual way incense is used in perfumery I find this particular one in Aedes Musc Encense to have a true clarity and transparency. I notice its presence but it’s not overwhelming the whole composition. So far the perfume is absolutely stunning and there’s still more to discover. Addition of cashmeran introduces quite a stir to the perfume. Its multifaceted nature is fully displayed through this fragrance. At first it smells moist and lithoid, like a wet concrete wall which nicely corresponds with frankincense smell. It’s a specific olfactive sensation that’s appealing in its oddity. 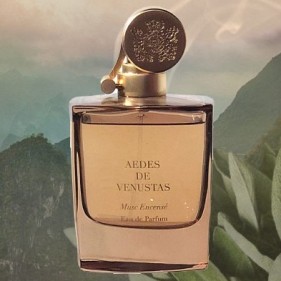 Smelling this one further, cashmeran reveals a driftwood facet – a combination of soft woody whispers blended with the aroma of marine breeze and salty water. In addition to that you can also smell some warm sand and sun-kissed skin vibe mingling nicely in the background. From there Musc Encense ventures into a musky territory. At first it smells more creamy, almost milky thanks to tonka bean. When tonka fades out an individual musk is revealed. It has quite dry aroma that is animalic. But animalic in a pleasant and sensual way. There’s nothing dirty about it. This perfume is pure sexiness.

Musc Encense as an homage to Tonkin musc serves its purpose in impeccable way. It’s a well done perfume that is complex, non-obvious but most of all – it intrigues. It also feels very fitting as a new addition to Aedes de Venustas range. I seriously think I might need a large decant or a partial bottle. I’m a fan of transparent, inoffensive incense and Musc Encense is pretty in so many ways. The brand decided to work with perfumer Ralf Schwieger (who also composed Iris Nazarena) and I think he created a new quality of a smoky-animalic scent. Musc Encense is an eau de parfum in Aedes signature 100 ml zamak bottle. 3×10 ml travel set might be available too. Search for it in June.