While watching various movies I noticed two funny things. One thing is that when a wealthy family is portrayed, their beautiful house is usually placed at the very back of their mansion and in front of it there’s the impeccable garden full of flowers, fountains and bushes trimmed in some fantasy shapes. Second thing is that if there’s a murder plot in the film, the gardener is usually one of the first suspects. But let us focus on a garden itself today as Extrait d’Atelier presented a few months ago a perfume dedicated to the art of gardening. Follow me to the olfactory green maze.

Maitre Jardinier opens with a subdued zestiness coming from a marriage of lemons and bergamots. They feel as if they were distant & you could only hear remnants of their voices. After a few minutes a juicy and sweet element of mandarine and orange joins the composition. These two are more intensive than bergamot-lemon accord from before. This citrus opening is like a sun that wakes up the day. There’s something exhilarating about such concoction. It doesn’t take long until juniper berry cuts into the citrus flesh like a knife. It has a metallic feel with its usual aromatic facet of gin.

After this metallic sharpness subsides you’ll be left with aromatic, almost fougere-ish accord on your skin. The smell of pine needle brings forward a coniferous-green sensation that feels warm, slightly sappy. It’s the smell of the forest and as you inhale and exhale your body starts to feel more relaxed, at ease. There’s something aromatherapeutic about Maitre Jardinier as if it had a healing powers from Mother Nature. Laurel introduces a supple dryness with a hint of something peppery, making me think of garden bush. I really enjoy the vibe of tranquility that is created by this perfume.

Some time later this verdancy is ‘interrupted’ by a special guest. The moment peony arrives, the structure of Maitre Jardinier very slowly fills with its floralities. There’s nothing extravagant about this flower – it is really sheer, slightly watery and even reminiscent of a pear in the slightest bit. But its pastel pink color somehow makes it to the top and above the layer of green. Further into fragrance development its scent becomes more balmy and resinous thanks to fir balsam which spreads the beautiful aura of a magical forest where you could meet things out of this world.

Frankincense which becomes more pronounced later on, adds a feeling of mysticism. The smokiness it posesses is quite spiritual, kind of churchy, but what’s most interesting about it is the fact that on my skin it smells like a warm stone. Cedarwood gives Maitre Jardinier a substantivity in the base but with a bit of roughness. Amber has some mineral, slightly salty qualities in this perfume & I think it’s suitable here. Musky elements of the drydown oscillate between being clean and not clean. Addition of white woods strengthens the foundations of this new composition.

Maitre Jardinier by Extrait d’Atelier is a well done woody-aromatic-green perfume that proves that pine notes are suitable for more than just a toilet cleaner. The brand worked with perfumer Bertrand Duchaufour in order to shape this perfume in the best way possible. The result is an intriguing living labyrinth of smells in which you cannot be certain what awaits behind the corner. The fragrance is made in eau de parfum concentration and housed in a 100 ml bottle. But from now on Extrait d’Atelier is also offering a 10 ml travel version of all their scents. A great way to treat yourself.

Even if two countries are separated from each other by thousand miles it doesn’t mean they cannot be connected in some way. For countries are more than just a land and a shape on a map. Most of all it’s people who create countries and their unique cultures. And despite the fact that we differ among each other we’re all humans & we often share interests, dreams and passion. Perfume house of Neela Vermeire Creations often brings to our attention special connections between India and Europe. Their new composition which also marks the beginning of a new olfactive chapter was inspired by Sir Thomas Wardle who helped to promote Indian wild silk in Europe. 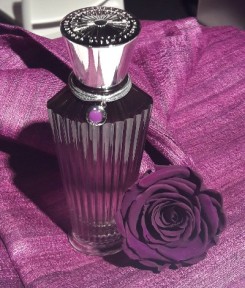 Niral opens with a somewhat fizzy impression that is very faint at first but intensifies after a minute or two. A little longer and this effervescent aroma becomes more lively. At some point it becomes obvious that it’s a champagne accord – it’s bubbly and a little bit yeasty. Sparkling character that it possesses is additionally highlighted by pink pepper that gives a sparkling & bubbly feeling as well. But with that extra pinch of spiciness added. This serene opening continues with a distinguished note of tea and in this particular case I have green tea in mind. It smells of a warm brew and of tannins – and those are slightly bitter. So far the perfume is filled with harmony and peace.

It takes time before Niral fully develops on one’s skin but I assure you that it’s worth all the time. For when the right time comes it begins to effuse a magnificent iris scent. If you have smelled Ashoka before and noticed iris in it – then saying that Niral is that iris but several times better would be the best recommendation for you to try new NVC composition. It’s a very complex part of this fragrance, it has multiple thin layers that come out one after another. At first it’s very buttery and rich. The next time I took a whiff it was more creamy and had a gentle sweetness to it, almost like a whipped cream. After that it becomes soft & more silky with a moment of more tea prominence. 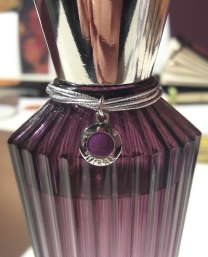 Buttery phase was a lasting one on my skin while the whipped cream impression was just a glimpse. Then silky part took more time to evolve & finally it went towards a floral direction. Floral and now powdery iris started to envelop itself in a translucent rose lace that brough more value to Niral. The perfume remains centered around iris anyway. Presence of rose surely helped to extract all the best that iris could offer. But that’s not the end of flowers – there’s also magnolia. Through its pale, almost watery fragrance you really get a feeling as if you could touch the finest silk through this perfume. I like to imagine that notes here are like warp and weft that weave a scented fabric on skin.

Further into the development of NVC Niral there’s still a lot of excitement that this perfume has to offer. It’s not so soft and transparent anymore but solidifies due to presence of several woody notes. There’s a hefty dose of cedar that the perfumer used. It gives the feeling of a crude surface of a tree trunk but when sandalwood enters the scene everything feels much smoother in an instant. All rough edges became more round. Niral also features cabreuva which, as I had to check, is another woody material with a woody, dry and sweet scent profile. Here angelica seed is also revealed introducing some verdant shades with light spiciness. There’s also a mellow muskiness of ambrette. 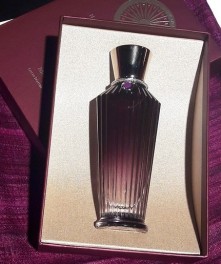 Drydown of Niral is heavy and full-bodied. There’s a lot of leather going on and it smells rich and intense, as if someone only just dyed it black. The odours of a leather workshop are still floating around. Cardamom’s roasty spiciness adds that extra punch to it. There’s even a moment when I’m reminded of the smell of a heady red wine. But even after saying all that I have to admit that orris still remains a key to this perfume and its main theme. When I smell it I’m a little reminded of Masque L’Attesa but that one was way more yeasty because of the beer extract that they used to compose it. Niral is much more calm and has intricate built that really changes on skin over time.

When Neela informed me that her brand is going to launch a new iris perfume I was super excited but at the same time because I’m a big fan of the brand I set my bar of expectations really high. At Esxence I sprayed Niral on skin every single day and I couldn’t get enough of it! Niral which is a fruit of work of Neela Vermeire and perfumer Bertrand Duchaufour is absolutely amazing. The complexity and intricate patterns make it a must-try iris for anyone who loves the note. And the bottle with a purple hue (it’s a marriage of NVC signature bottle and Mohur Extrait flacon)is very elegant and pleasant to look at. Neela Vermeire Creations Niral is available as 60 ml eau de parfum.