It took me a month to share with you my holiday trip in Austria, Northern Italy and Switzerland. I hope that you enjoyed looking at the photos and hearing about places I visited. Now comes the time to talk about perfume again, though I had a little bit of hesitation to make my break slightly longer.

New from Kilian, except of having a name that makes me roll my eyes, is one of the more interesting releases over the last few years, at least for my taste. Rolling in Love opens with a mild, vegetal amber impression created with ambrette. It’s slightly cold and austere at the beginning but then it warms up thanks to the skin and other elements of the composition. Iris joins the scent after less than 5 minutes adding a buttery texture. Orris is a bit chalky, powdery and slightly on a dry side. I also find it to be more woody, slightly incensy even. Almond accord adds a sweet & milky facet that turns nutty and caramelized later. There’s a disturbing burning quality in it and for a moment Rolling in Love smells like bread pudding to my nose. Freesia and tuberose create a flirty floral bouquet of a creamy nature that doesn’t feel diffusive but more like clinging to the skin. Tonka bean absolute gives this new Kilian an oriental vibe due to releasing a spicy and aromatic and creamy cloud that is so specific for this material. In the end the entire scent immerses in sweet vanilla that has a rum booziness in the back. Rolling in Love would have been a gourmand if it wasn’t for the floral part. It’s not bad at all, super pricy though. I like the red-inside bottle but I can live without it. 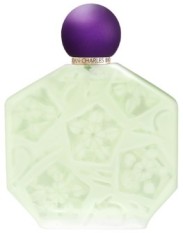 Soon after the holiday months were over, Jean-Charles Brosseau introduced Heliotrope to his Fleurs d’Ombre range. The perfume was meant to keep our summer memories alive for a little bit longer, and it does it perfectly. The beginning brings forth a floral aroma that without a doubt is a violet. It’s quite strong for a couple of minutes, combining fresh, ozonic, powdery and verdant facets. When it becomes more sheer it’s time for citrusy tones to come and play. In case of Heliotrope it’s a bitter-sweet game, as firstly we have a sweet & juicy mandarine but secondly there’s a tart & tangy grapefruit to counterpart the first. Mimosa makes the perfume powdery in a dominating part. It’s scent, sweet like a flower pollen from tiny yellow pom-poms creates a bridge to the heart of the composition. Heart is where iris continues the powdery medley but in less sweet way. But in overall feeling this perfume is like a meadow – with every step you can meet something different. There’s also a rose, pink & innocent, a glamorous gardenia and of course heliotrope, powdery yet balsamic and flowery. The drydown of Jean-Charles Brosseau Heliotrope is like a warm hug. Ambery tones wrap around your neck like a scarf while creamy sandalwood and a white musks cocktail create an imaginary blanket that covers your arms. There’s a lot going on in this perfume and few times I thought there was too much at once, a bit of chaos in it but it’s an enjoyable scent in my overall verdict.

Olivier Durbano and his fragrances named and inspired after semi-precious stones have quite a popularity, especially in Europe, and I know that Polish customers love these creations a lot. Lapis Lazuli, a 12th perfume opens with an aromatic pungence of green, slightly acrid and fatty cypress note. After a few minutes it becomes a bit more astringent and medicinal when tea tree accord kicks in. Artemisia keeps everything more grounded and earthy. Addition of clove simultaneously adds to the medicinal feel and also brings its own spiciness as a side pillar. Molecule of rose oxide adds a bit of a distant floral feel right there. Thyme gives Lapis Lazuli a herbal vibe that quickly softenes when immersed in a note described as plant milk. It smells green, sappy. Like a combination of fig milk and other things alike. Spelt and iris give this perfume an unexpected grainy texture that goes powdery after some time. Olivier Durbano fragrance wouldn’t suit his range if it wasn’t heavy on incense and other resins. That’s why you can find a thick elemi note in the base which is surrounded by parched vetiver and cedar wood with a cracked surface. It feels rigid, cold, yet there’s something melancholic there. Something that draws you deep into it. Ambergris and tolu add to the balsamic density of the composition. Musk is a hint of dirty but it gets engulfed in the incense wave.

I’ll be abroad on a business trip for half of this week and on Friday it’s All Saints’ Day & I’ll be visiting family graves. I don’t think I will be able to write another article this week. Next week for sure!

Have you noticed that among perfume lovers there is quite a big group of people who are also tea lovers? For me tea has always been superior to coffee, ever since I was few-years-old I had no problem in drinking herbal teas to help me fight some illness or a stomach ache. Nowadays I’m a real tea addict, having around 50 different types and flavors. Tea can be calming, soothing, energy-boosting or refreshing. The latter one will be especially useful for upcoming summer. I’ve found a perfume that ideally suits the idea of a summer tea. Get your cups (and wrists) ready.

Thé Poudré blooms on the skin with a delightful fragrance of mimosa. At first it has a transparent, kind of watery aroma that after a few minutes begins to have more defined lines. The feeling I get as if this perfume was absorbing the power of the sunlight & assimilating it into own mimosa accord. Just after a few minutes mimosa is a bright blossom that radiates its gorgeous, tranquil scent – it’s truly realistic. The note is also defined by a hint of tart bergamot that gives it a juicy edge.

On the other hand there is also heliotrope right behind mimosa. Thanks to it we get to experience a gently sweet, powdery aroma. When you pair sunny mimosa with powdery heliotrope the result is the smell that could easily imitate floral pollen. Imagine yellow pom-poms that scatter a scented powder each time you shake them. There is a bit of summer fun hidden in Brosseau Thé Poudré, you know. Energy of this perfume is truly inspiring & intriguing because on one side it’s toned down, peaceful and on the other side it boosts ones energy. It’s a very interesting facet of mimosa.

Some time later the perfume starts to have a light green hue around it. At some point a new element of the composition starts to become clearer until it becomes obvious. It’s the smell of tea. Surprisingly press release of Thé Poudré lists earl grey. Well, it does have the bergamot flavor to it but in my opinion it doesn’t have enough presence for a black tea. That’s why I’m going to say that on my skin it smells rather like a good quality green tea with a citrusy undertone. It also has a gently herbal aspect and tannins are noticeable too! Deeper into the fragrance development there is a little bit of floral spiciness from carnation. To me this part is just a small addition to the fragrance.

At some point finally comes the right time for iris to reveal its presence. Its silky petals are soft and they wave elegantly as the wind blows. In Thé Poudré iris is not very powdery. In fact its relatively transparent. There’s something aquatic and breezy about it – like a scent of summer florals carried by the wind. When it settles on skin, iris evolves into more creamy being, very comforting and charming. In the background there is hint of orris rooty earthiness as well. Drydown has a pretty sandalwood which is presented in a lightweight manner. Delicate cedar is its company – to my nose its a tad more substantive than sandalwood & it adds a small pinch of saltiness to the blend.

Tonka bean introduces a bit of aromatic qualities to Thé Poudré – it’s warm and creamy, bringing to mind the smell of sun-kissed skin and some body lotion. In late drydown a cloud of white musk is being released. It smells clean and pure, like a pile of fluffy cotton pillows that you could jump on top of. It gives a cuddly softness that makes my mind go all dreamy. And in this case I dream about a hammock by the sea, good book and chillout music in the radio. A summer getaway.

Perfumer Thomas Fontaine did a great job creating Thé Poudré for Jean-Charles Brosseau. The perfume is truly summery. Complex and delicate in the richness of ingredients. To me it’s a little bit like a combination of Prada Infusion de Mimosa, Frederic Malle L’Eau d’Hiver and Heeley Iris de Nuit. It’s a great alternative to citrus scents for summer. Logevity of Thé Poudré is good and its sillage is small. It’s EdP concentrated and is available in 30, 50 and 100 ml bottles. Do give it a try!