Ernest Hemingway surely deserves a title of one of the most memorable American novelists of 20th century. His numerous adventures, including participation in World War I or being a Spanish Civil War reporter earned him a lot of admiration of generations to come. From various sources we know that he had several women in his life and that he drank a lot. In 1961 he committed suicide. Personally I’ll remember his name mostly because The Old Man and The Sea, which I read at school. Masque Milano decided to pay homage to his person through a vetiver-centered perfume.

(Homage to) Hemingway makes a bold first impression by straightforwardly showing off its heart made of vetiver. For couple initial minutes the smell is quite dense and really oily, sitting on top of the skin as if it had difficulties to begin to evaporate. When the composition finally starts to breathe the vetiver starts to be more spacious but it doesn’t get airy or lightweight. It’s a solid and really substantive element of a new chapter in Masque story. There are several facets that entwine with each other. First one is a rugged woody aspect – with chipped edges and uneven surface. 2nd of the facets embodies hay-like aromatic dryness of the vetiver grass and its coumarin-infused properties. Last facet is more green and slightly stingy to my nose, with a scent effect similar to tannins. 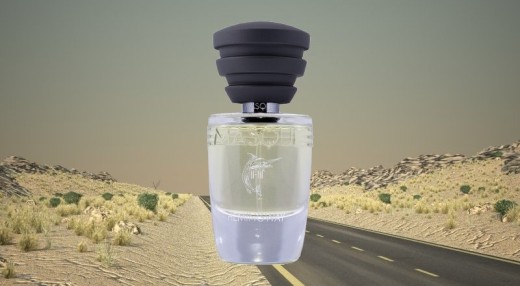 According to press release Hemingway features oils of vetiver from Haiti and Java & believe it or not but in my case vetiver is the only note I can smell from this perfume for the first couple of hours. It took as long as 4 or even 5 hours for me to be able to smell the bitterness of rhubarb – but it was a very brief appearance. There was more ginger going on in the later stage of development. It added a spicy twist to the composition with a little bit of freshness. There was also a powdery & tingly backnote to it, like a ground and dried ginger. Leather in Masque Hemingway really caught me by surprise – it’s one of the most unusual leathers I’ve smelled in years. Quite typical at first it quickly developed a resemblance to tar or even asphalt! Dark, intense and pungent. Cedarwood and patchouli ensure great longevity and depth to this weird yet thrilling perfume.

Considering the fact that Masque Hemingway really puts a heavy accent on vetiver and its multiple facets on one side, and the fact that I’m not a vetiver-frenzy person I think I did quite well wearing the scent for the sake of writing this review (I did it for you! ha!) Without much difficulties I can imagine Hemingway becoming quite popular, especially among men perfume audience since it’s much closer to masculine end of spectrum. The composition was developed by Fanny Bal from IFF. Sillage and longevity are above average. It will be available as eau de parfum in 35 ml bottles.

The Big Apple, NYC, A City That Never Sleeps, Gotham, Metropolis, New Amsterdam, The Empire City… There are many ways to call New York City. It’s a place where cultures clash globally. Every corner you can notice people of different ethnicity and you can hear a huge number of different languages being spoken as the crowd is passing by.  Just like Frank Sinatra sang – it’s a city you “want to be a part of it”. I bet that if you’d ask local people they’d mention Times Square as one of the most iconic places in NYC. And that’s what Masque would like to convey in their new creation.

Times Square (I – IV; act I, scene four) begins with a delicious hazelnut aroma. It feels nutty, creamy & delightfuly sweet. There’s something very smooth about it, as if someone just transformed these nuts into a sweet paste that could be used in most sophisticated pastry sold in a trendy patisserie. It then transforms into a glossy lipstick accord. This one smells of candied violets. It’s a combination of boudoir powdery notes with crisp aroma of purple flowers of violet. It’s delicious and feminine – smelling really like a lipstick. It’s funky, an in press release we read “…The cherry of the whore’s bloody-red lipstick melts with the strawberry of her chewing-gum…”

Later on Times Square develops a gently fruity floral facet. It’s given by osmanthus which first gives more of a flowery vibe but then it seamlessly transforms into a fruity smel of ripe apricots. There’s some powdery freshness to it as well. Tuberose which at some point joins osmanthus is really well-behaved. I find it gentle and sophisticated as it blends together with other notes to create this cosmetic, fruity-floral concoction. Personally I still consider candied violet as the leading theme here. But there comes a moment when this new Masque fragrance starts to shift.

It develops this strange, urbanistic smell that it hard to mistake for anything else. The smell of warm asphalt starts to emerge from Masque Times Square. It’s a thrilling sensation to smell something like that. Absolutely no repulsive feelings were involved. I think it’s a tricky way of combining styrax and gaiac wood. They’ve been mixed together to recreate the smell of city streets by effusing a balsamic, resinous, somehow dirty vibe. It’s a very interesting manipulation of notes.

At later stage of development I get a hint of rose that in the context of previous things that I smelled, instantly provided me with association that I’m smelling a bubble gum. There’s also a bit of popcorn-like feeling to Times Square. Base of the perfume is creamy thanks to sandalwood. It adds substantivity and stronger body to the scent. What I especially liked about this perfume is that at Esxence, Riccardo and Alessandro – two brand founders, deconstructed the scent letting people smell singular accords. There was a separate vial for asphalt, lipstick etc.

Do I look at Times Square by Masque as a perfume? Yes and no. There is a part of it that really is perfumistic, with an idea to a perfume and well-organized construction of it. On the other hand I perceive it as a project to some extend. As a conceptual creation meant to be smelled at exhibitions dedicated to New York City, but not necessarily something you’d like to wear. It’s a fun fragrance anyway. It’s been created by IFF perfumer Bruno Jovanovic. This eau de parfum comes in 35 ml bottle in same new design that was initiated by the launch of L’Attesa in 2016.