During my September trip to Florence for Pitti Fragranze I could see a couple of trends dominating the perfume scene at Stazione Leopolda. One of them was “it’s time for iris” as many perfume houses decided to introduce new creations that were either focused, or at least contained iris as a side note. The second theme that I observed was “never enough patchouli” – I’ve seen quite a lot of new patchouli-centric fragrances presented there, from Parfumerie Generale, Laboratorio Olfattivo, Perris Monte Carlo. The last motif – “oud days are over” was probably the easiest one to notice. With slogans such as “oud is passe it was clear that perfumers are getting fed up of oud launches flood. There were even few launches featuring oud in the name but with no oud in composition.

One could think that either these brands are not over oud yet or they wanted to manifest their boredom with oud accord by creating a fragrance without oud in the juice but with oud in the name. One of such launches, officially presented at the Unscent section of Pitti Fragranze was Agonist White Oud. The latest composition released by this Swedish perfume brand begins with a very pleasant aroma of lily-of-the-valley combined with the smell of violet flowers. This concoction provides a pretty floral sensation that is very mild and sheer, a little bit dewy and reminiscent of high quality soap. Since the scent initially is soapy, White Oud also brings the association of clean and well-groomed person.

After around 20 minutes the clean and soapy sensation created by violet and muguet subsides and moves toward the background of the composition. For a few minutes I have a glimpse of freshness that makes me think of crispy leaves of violet and geranium. None of these two is mentioned in the composition of White Oud but I’m certain of smelling the juicy and slightly green crispiness of aromatic leaves. A white later this new Agonist creation starts to smell of beautiful roses.

According to the pyramid of notes provided by the house of Agonist it’s the May rose they used in this fragrance blend. This rose species provides the aroma that is voluptuous, sweet and smooth. From underneath the pink petals you can smell a distinctive honey undertone that entwine with pale elements of green aromas that shine softly like dewdrops in the morning sun. So far White Oud is very elegant, sophisticated and well-balanced perfume for many various occasions.

A bigger change in the development of Agonist White Oud happens after 2-3 hours since the moment of application. All of the floral tones become much weaker and the perfume becomes more woody to me. The first sign of the mentioned woody stage is the appearance of tonka bean. This material doesn’t brings its usual aromatic character that is lush, creamy and opulent. Instead tonka smells dry here and it’s only thanks to the small bits of ylang-ylang that it feels more smooth and pleasant. Ylang is not very prominent here but it plays its role nicely by softening a bit rough edges.

Cypriol oil and patchouli come forth later as the perfume develops towards the drydown notes. Cypriol is not as bad as I though it would be. Yes, it is a bit oily but its aroma is dominated by the smell of dry wood, cedar maybe. Patchouli on the other hand doesn’t smell like rotten leaves, it’s more transparent here. It provides a bit of an earthy sensation but most likely it gives depth to White Oud composition. This impression lasts up to 2 following hours. 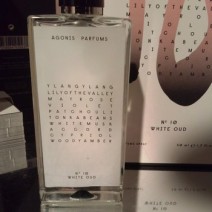 Just like after the rain comes the sun, after the rough phase of a perfume, often comes the phase that is smoother. Indeed that is true in case of White Oud by Agonist. After a longer period of time this fragrance starts to smell of a rich amber that is resinous and bright. There’s also something woody about it that makes me think of sandalwood or cashmere wood. There’s also a generous dose of white musk but I was surprised by the way it smells. It’s not the artificial smell of laundry, soap, powder or creamy vanilla. actually it’s a bit animalic in a specific, kind of sweaty way.

White Oud also contains an ingredient named “white oud” but creators highlight that it’s an abstract, imagined accord that doesn’t exist in the real world. Generally speaking Agonist White Oud was a positive surprise during Pitti Fragranze. This is a well-blended and nicely balanced perfume, there’s a harmony in those notes. It’s a quiet composition but it lasts for 7-8 hours. It’s a kind of perfume that is suitable for many occasions – for a meeting with friends, for a date or to work. White Oud is an eau de parfum available in 50ml spray bottle and also in artistic glass sculpture bottle (they cost a little fortune). For the moment I don’t know who is a perfumer behind this scent.

[note] pictures via InterTrade Europe, the last one is my own, all rights reserved.