In early September 2013 the valued English perfume house of Penhaligon’s launched a new fragrance named Iris Prima. From the first announcement I was very keen on trying this new release and finally, after more than 2 months of waiting the perfume finally made it to Poland and I can give it a try, finally! In Penhaligon’s line Iris Prima is a special perfume because for the first time the perfumer was allowed to enter behind the scenes of English National Ballet, where he observed Nathan Young and Lauretta Summerscales, two rising stars. All this gave inspiration for Iris Prima.

On my skin Penhaligon’s Iris Prima opens with a delicate, carroty smell of iris that within a few second transforms and bursts with powdery notes. It’s the kind of iris I like the most, when it’s powdery and smells of flower pollen, but at the same time it has much different feeling than flour or chalk powder. Right from the start the iris note is soft and gentle, it whispers instead of talking out loud. 15 minutes into the development and I begin to notice first leathery elements in the composition. It’s still delicate and fluffy. I would dare to say it’s more like the softest suede instead of the thinnest layers of leather. Very sophisticated, classy and absolutely elegant in this current minimalism. It plays a right song in my heart.

After a while, that is somewhere between 30-45 minutes after spraying the perfume on my skin, Iris Prima start to shift a little bit. Powdery iris becomes more supple while a woody vibe is growing stronger. It’s vetiver that smells woody to me with hint of rooty sensation to it. I also find this note to be slightly dusted or ashy, which actually makes me thing of old wooden boards creating a stage in an opera or theather. I suppose it’s the exact association the perfumer wanted to suggest.

After 1,5 hours Iris Prima becomes warmer and it fills the air around you with enveloping and cuddly fragrant molecules. There’s a bright and shiny amber, I don’t know if it’s real but it smells fantastic. There’s even something almost animalic to it because of benzoin accord that the amber is paired with in this Penhaligon’s composition. And then, a beautiful creaminess of sandalwood opens the scene. It’s substantial but feels very lightweight, just like the other notes, everything is light in here. 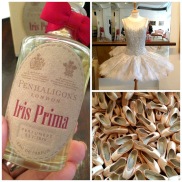 When the clock shows that more than 2 hours passed since I applied Iris Prima more flowery aromas appear in my nostrils. I get quite a lot of bright white flowers, jasmine in particular. It has a nice saturation and richness while at the same time it lacks indols and its sometimes beasty character. I suppose that this note smells this way thanks to hedione and paradisone, two artificial aroma chemicals that are capable of recreating the aroma of true jasmine. I really don’t mind Penhaligon’s using them, they use these compounds right and not in overdose.

Later on I can also detect the sweetness of vanilla that is warm and slightly airy. It’s combined with a gentle spiciness of pink pepper and even a hint of bergamot can be traced now while it actually resides in head notes. after 3-4 hours, Iris Prima is a fully developed scent on my skin that smells of powdery iris, delicate jasmine and probably a little bit of white musk combined with soft leather-suede. It lasts for a couple more hours in this form and at the 6-8 hours mark it becomes noticeable only from the skin surface, you can’t notice it any further above the body, well, I couldn’t…

Alberto Morillas did a good job as a perfumer for Iris Prima. He translated the gentleness, airy moves and vitality of a ballet into a fragrance that is also gentle, airy (but not completely invisible after a few minutes) and graceful like a plié. It’s all in this perfume, a stage, a ballerina and a tutu skirt too! Penhaligon’s Iris Prima is available in 50ml and 100ml bottles of EDP, the label is made of real leather with fuzzy feeling and there’s a red ribbon on the neck of the cap. Goes on my wishlist!