To me Andy Tauer is a person to admire. To achieve this much being a self-taught perfumer with solid chemical knowledge base is not easy nowadays. But I believe that one of these days I will be like him, creating perfumes under my own label. After a longer period of being idle he launched Noontide Petals earlier this year. In November Andy has a special treat for his fans. According to his blog, he received an extremely rare rose oil made from roses growing in Nangarhar, Afghanistan’s rose region. With this oil he decided to make a special, limited fragrance, for Holiday 2013 season. 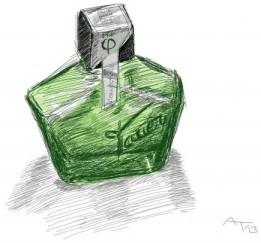 φ PHI Une Rose de Kandahar, for that’s the name this perfume bears is a really luxurious and unusual blend of many different ingredients that usually cannot be seen in one composition. The first waft of Une Rose de Kandahar brings the loveliest apricot accord I’ve ever smelled. It’s so rich and smooth, kind of fuzzy like the slightly pink skin on this fruit. It feels incredibly elegant as for a fruity note. There’s also something fresh and crisp about this accord.

In 15 minutes the apricot becomes weaker and the perfume begins to warm up. It’s cinnamon that is responsible for this behavior of PHI. It smells warm and it smells spicy. There’s also something cuddly in this note, not to mention that there’s this mild sweetness around it. For a while this aroma reminds me of hot gingerbread cookies. Is Une Rose de Kandahar a gourmand perfume? Not exactly, although it contains a couple of ingredients that might suggest that.

The sweetness that I mentioned just few lines earlier – it never becomes overpowering or sticky. Maybe that’s because of a bitter almond that counterparts sweet with bitter so that they attain a perfect harmony, a balance. Then, there’s also a juicy hint of bergamot. Its acidic flavor blends nicely with other ingredients without pushing any of them to the front. In my opinion the conjunction of apricot and cinnamon is the best part in the opening of PHI. These notes evolve from one to another in around 1 hour.

So after the fist hour of wearing Une Rose de Kandahar is over we’re slowly getting access to the heart of the composition. All the spicy notes are fading away, unveiling the curtain. Behind it there are roses. The Nangarhar region rose is amazing. It gives the full-bodied, voluptuous scent, very rich and powerful. It’s seductive and mesmerizing, like a little red dress. Few adjectives that can be used to describe it are: smooth, velvety and royal. That’s how Une Rose de Kandahar smells like.

30 minutes after that diva rose appeared on the scene, the perfume starts to effuse some additional accords. What I smell is probably some plum. It has a slightly candied odour plus there’s also some sheer smokiness to it. Then rose is amplified with Bulgarian rose absolute so that no one has doubts about the key-note in PHI. The more time it sits on the skin, the stronger become the other floral notes. I’m not sure but I think I noticed osmanthus (I got a tea reminding aroma) and maybe marigold? Won’t bet on it. After a few hours PHI Une Rose de Kandahar undergoes another change.

At the mark of 3rd (or maybe it was 4th) hour this special Andy Tauer perfume becomes something utterly amazing and unbelievable. PHI emanates the most beautiful and seductive tobacco accord. Oh My God! What a rich and good vibe it has. You can almost see the golden color of this note and if you ask me I just have to say that I smell lots of wonderful honey combined with it. It takes my breath away. I cannot stop sniffing my arm every couple of seconds. I think I could smell like this forever. Can you believe that in Une Rose de Kandahar it was the 1st time Andy used tobacco absolute in perfumes!? Only someone of incredible talent could make such a great use of a new material.

The super cool thing about the tobacco accord in Une Rose de Kandahar is the fact that it doesn’t smell smoky like a cigarette, but it’s more woody and animalic, kind of wild also. All the impressions of tobacco, honey and spices are very lovely and they last for amazing few hours. I think that the base notes started to appear after 6-7 hours. It continues the journey on the same path.

Press materials for φ say that it contains lots of patchouli. But I can’t smell it! So it’s either a woody kind of patchouli (because I smell wood) either it’s transparent to my nose. What I smell for sure is a wonder-vanilla. It blends so nicely with tobacco and woodsy hints of vetiver that it’s hard for my mouth not to water. Tobacco + vanilla is such an exquisite and decadent blend. There’s also tonka bean that introduces a creamy facet to the drydown.

There are also musk and ambergris that shine brightly after many hours that Une Rose de Kandahar spent on my skin. They even effuse both animalic and mineral, softer tones alternately. When the perfume gets near the finale one can smell the explosion of different aromas that appeared throughout. I can smell cinnamon, tobacco, rich roses, vanilla, tonka. Every one of these notes sparkle with different light but together they create one big flash for the olfaction. At the moment you can’t find the other perfume on the market that would smell like PHI. It’s innovative! That’s it.

PHI Une Rose de Kandahar joins the Collectibles family of Andy Tauer Perfumes. It’s a special edition fragrance dedicated to Holiday 2013 season (this is going to be a super Christmas gift!) and because of the rarity of Nangarhar rose oil it will be available only until the stocks lasts. Once the last bottle is sold – it’s gone. PHI comes in 50ml pentagonal bottle made of green glass. It can be yours also in 15ml travel spray as a part of Explorer Set. Preorders accepted as of the beginning of November. The products will be shipped after mid November. PHI is an eau de parfum.

On me it lasts forever – definitely more than 12 hours. Its power is great at the beginning and becomes more subtle with time. It goes stronger for around 8 hours and then the sillage drops.

[note] A big thank you to Andy Tauer for a sample. All pictures via PHI press release or Tauer Blog.